I made this Chicken Tikka Masala using Smelly Proof bags, sent to me as a gift for review purposes. As a member of the Amazon Affiliate Program, I receive compensation for the products sold through the affiliate links in this post at no cost to the buyer.

Those who know me know that I’m not a chicken person. But, since I started cooking for my friends, chicken is always in high demand. Some of the dishes people request the most are my Chicken Polvorosa (a delicious Venezuelan chicken pot pie, very similar to my Albacore Tuna Polvorosa), chicken soup, and more recently, this Chicken Tikka Masala… I guess that is a flavorful, spicy, delicious, hearty dish that is hard to resist.

Even if this recipe is associated with Indian cuisine, its origins can be traced to the United Kingdom. There was a time in which Pakistani chefs used to dominate Indian restaurants there. It seems the dish was created by one of those chefs.

In fact, this dish is so popular in the UK that it is considered a “national” dish. It symbolizes how the British have absorbed and incorporated the flavors and cooking techniques from other cultures into their diet.

I learned how to make this recipe by chance. Last November, cooking with my fellow blogger Patty, the cook behind Juntos Sabe Mejor, she made it. People tasted it. They love it. And now they keep asking me for more.

A star is born…

This has been a great discovery for me. It has been my very first introduction to the exotic flavors of Indian gastronomy, garam masala, and a new way to combine spices including cumin, coriander, bay leaves, cloves, cinnamon, turmeric, cayenne, and cardamom.

Chicken tikka literally means chicken bits. This is a popular Punjabi dish. It’s popular not only in the Punjab region, in India, but Bangladesh and Pakistan. It consists of small, boneless chicken pieces, marinated in a yogurt and Indian spices mixture, and then cooked in skewers in a tandoor clay oven.

To marinate the chicken, I used one of my pretty convenient Smelly Proof storage bags. They are made in America, hand washable and reusable, leakproof, durable, nylon-reinforced, BPA-free, and FDA approved. They come in seven sizes and, after using them with all the Indian spices, I have to say they are smelly proof.

What is Chicken Tikka Masala?

Now back to my chicken. Chicken tikka masala is chicken tikka, that once has been cooked in the skewers, is served in a masala sauce. I would say there are as many masala recipes as cooks in the world.  The masala in Patty’s blog inspired this recipe. I only changed the cooking method.

This masala consists of chunks of onion, red bell peppers, slivered almonds, and golden raisins seasoned with garam masala and roasted. Then, everything is liquefied with tomatoes to create a deliciously smooth and thick gravy, complimented with crème fraîche for a really creamy delight.

How to Make the Easiest Chicken Tikka Masala Ever

I cook for third parties. Therefore I have to make a lot of chicken at a time. Instead of cooking the chicken in skewers, I save time by roasting it in baking sheets conveniently covered with parchment paper (you can also cover them with a silicone mat). In addition, I also roast the veggies, almonds, and raisins for the masala in baking sheets. Then, I set the timer, and I don’t have to be standing by the stove. Bingo!

Regarding garam masala, the mixture of Indian spices used in this recipe, I substitute it by adding a pinch of the following spices: cloves, black pepper, and cardamom, plus a double pinch of cinnamon, to both the yogurt marinate and the masala gravy.

I hope you like this recipe as much as my family and friends do. Served over a bed of basmati rice, this chicken tikka masala will make you feel like you’re dining in your favorite Indian restaurant, and thank God for diversity… because variety is the spice of life!

Thank you for subscribing to my YouTube channel and visiting my Amazon store. 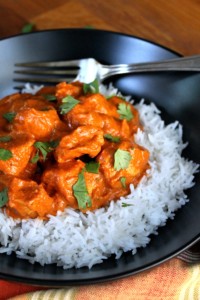 For the Chicken Tikka