It has been a while since I wanted to make this galette des rois: a kings’ cake, like the one they eat in France during the Epiphany, twelve nights after Christmas. In other words: today!

Old fashion as I am, of course I wanted to make everything from scratch but then, I didn’t have the time to make my own puff pastry —and roll it and roll it again and again to get the fluffy consistency of a good puff pastry.

So, I got it frozen from the store et voilà: I made this delicious galette des rois to celebrate the arrival of los tres reyes magos, which is how we name in Spanish the Three Kings or Three Magi who, according to Mathew’s Gospel paid tribute to the Christ Child bringing gold, frankincense and myrrh.

A dessert to say goodbye to the holiday season…

The Epiphany or Three Kings’ Day also marks the end of the Christmas season. When I was a little girl, my sister and I used to get little presents and sweets that were supposedly left in our bed by the exotic magi who traveled from the East to revere the Messiah.

In Spain, this is the day where children and adults get presents and eat Rosca de Reyes, a delicious sweet bread in the shape of a wheel or crown, filled with whipped cream and topped with candied fruit.

In France, galettes des rois are so popular that some bakeries start selling them by December and keep doing that well after the Epiphany too. Filled with an almond cream called frangipane, inside the galette is usually hidden a fève (a bean or a figurine representing baby Jesus.) The one who gets the fève or figurine, originally representing baby Jesus, becomes king or queen for the day and even for the year!

Instead of the fève or the figurine, I hid an almond. But if you freak about somebody shocking of hurting a tooth, you can hide a piece of chocolate or skip this part of the tradition.

I love galette des rois because who doesn’t love a buttery puff pastry filled with frangipane? This is a cake made in heaven for kings. I hope you like my recipe.

How to make Galette des rois

To make this recipe, you’ll need some ingredients and kitchen utensil utensils easily found online through my Amazon Affiliate Program, including:

Following is my recipe. Thanks for subscribing to my Youtube channel and visiting my Amazon store. 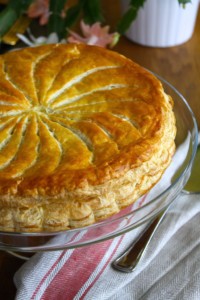 Thank you for sharing this galette des rois recipe on Pinterest.