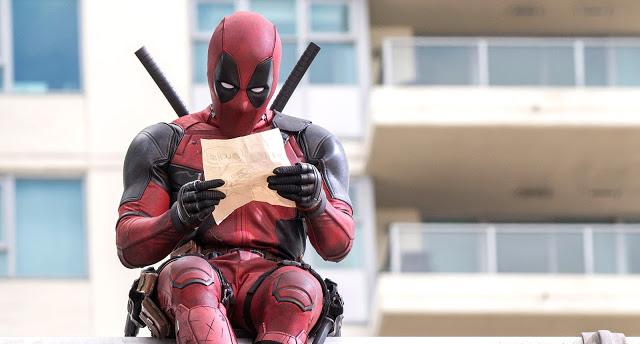 Deadpool. Grab a special agent, Wade Wilson (Ryan Reynolds), a mercenary with a life as hard as his dirty mouth. Make him fall in love with Vanessa (Morena Baccarin), a prostitute with a life more twisted than his. Make sure that when they’re about to be redeemed by the force of love —whose best expression is amazing sex—, it comes “el cancer” and plop! It ruins everything!
That’s when the anti-hero of the film becomes an anti superhero: an extreme treatment seeking the cure for “el cancer”, transforms him into a gifted super creature whose cells are regenerated by the force of a rare mutation that also makes him look like the survivor of a third degree burn.
And Wade has no other choice but to become Deadpool and walk through life masked, dressed in a Spandex suit. That suit is conveniently red so he can hide any stains form the blood that runs in spurts throughout the movie, while Deadpool goes thirsting for revenge.
He doesn’t come to save the world. No. Deadpool comes to give his own medicine to those who disgraced his humanity and messed up with Vanessa. Against those, he shows no mercy. And if he wouldn’t be in love with her, wouldn’t have a good friendship with Weasel (T. J. Miller) or wouldn’t express affection for Blind (Leslie Uggams), I would say Deadpool is a sociopath.
With so much blood and special effects, I spent half the movie covering my eyes. The rest I was laughing non-stop. Right from the beginning when we are introduced to the characters, their creators (Fabian Nicieza and Rob Liefeld), the script-writers (Rheet Reese and Paul Wernick), the director (Tim Miller) and the producers of the film Simon Kinberg, Lauren Shuler Donner and Ryan Reynolds (who call themselves ‘the real heroes’), one knows what is coming: laughter and good entertainment.
Reynolds’s performance reminded me of Jim Carrey in The Mask. Reynolds is a major comedian. His intelligent jokes and sarcastic comments are not wasted and are the movie’s let motif.
Is there a lot of profanity? Of course! But what else can you expect from a mercenary wretch? Of course there are as many bad words as bullets. But I tell you more: I never heard so many times the f word without being bothered.
So I think Deadpool, which opens tomorrow Friday, February 12, will be a blockbuster (they hope to raise $ 65 million only for this weekend) and I bet Marvel is already thinking about the sequel.
The timing for the launching couldn’t be better. Seasoned with a collectors soundtrack, including Angel of the Morning performed by Juice Newton and Careless Whisper by George Michael, Deadpool is primarily a love story, a story on how love can cure everything.