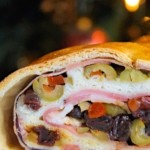 This is the most delicious and easy-to-make pan de jamón (ham bread) you can dream of!  First of all, it comes packed with one whole pound of ham. Second, you do not have to knead anything! Here, the kneading work, usually the most laborious part of making bread, is made by a Kitchen Aid.

Note: As a member of the Amazon Affiliate Program and other affiliate progrmas, I receive compensation for products sold through the affiliate links in this post at no cost to the buyer.

I made my first pan de jamón the same year my good friend Miro Popic published his book El libro del pan de jamón y otros panes. I attended Journalism School in Caracas and worked as a writer in Pandora, the weekly magazine that came on Saturdays with El Nacional.  My editor assigned me to interview Miro.

A pioneer making homemade pan de jamón, Miro gave me an autographed copy of his book. I treasured it for decades until I lost it while buying Christmas presents in a Caracas mall more than 15 years ago.

Born in Chile, Miro enormously contributed to Venezuelan gastronomy and culinary traditions. His book, made available to those willing to knead and bake, the secret to making a recipe as synonymous with Venezuelan Christmas as the hallaca, chicken salad, and ponche crema.

Thanks to Miro, making pan de jamón for Christmas and New Year’s Eve became a consistent tradition in my kitchen. Everything was going very well until I discovered La Cava do Iria: a bakery owned by Portuguese bakers, of course, in Santa Eduvigis, in Caracas. They made and sold the best ham bread I’ve ever tasted.

Then, I decided to focus on my Rum Christmas cake and cookies and leave the pan de jamón business to the Portuguese, blessed with the gift of making bread.

On Christmas 2007, already living here in Southern California and craving a good pan de jamón, I decided to put my hands in the dough again. I had to resort to common sense. The reason: I couldn’t find a full version of Miro’s recipe on the internet. My precious Mi Cocina a la manera de Caracas, by Armando Scannone, that cooking Bible we Venezuelans treasure, wasn’t available either. It came with all my belongings on a ship that only arrived at the Port of San Pedro in Los Angeles five months later.

How to Fill a Good Pan de Jamón

In addition to common sense, which, as we know, is not the most common of the senses, I put a lot of all the fillings a pan de jamón must have: ham, of course, manzanilla olives stuffed with piquillo pepper, and raisins, raisins, and more raisins because in the end, that’s what Christmas is for: to celebrate abundantly and with abundance.

The name of this bread is pan de jamón. I fill each loaf with a pound (456 grams) of the best quality ham. My favorites are the Black Forest and honey baked.  I like my ham thinly sliced. I don’t remember if Miro’s bread had bacon on it, but I added two slices of bacon, and the flavor contribution was worth every calorie.

When I began making my panes de jamón, I limited myself to cover the dough with the ham and the rest of the filling (as shown in the picture above.) But from watching Claudio Nazoa make his bread in a video, I adopted his filling method, which I explain below. Just in case, Claudio Nazoa is a Venezuelan humorist and another pan de jamón crusader.

What Kind of Olives To Use

I use pitted manzanilla olives stuffed with piquillo pepper. For me, manzanilla olives have a perfect size for this recipe. Unpitted olives are forbidden. Period.  Gordal olives, which are delicious and fleshy, are too big for the delicacy of a pan de jamón should be.

I sliced the olives and spread them over the ham when I started making my bread. Now, I also put add a row of whole olives. These whole olives go one inch away from one of the edges of the dough. Then, I cover those olives with the dough and, with my fingers, press down on the dough base to ensure the olives stay in place. This little trick guarantees that each slice of bread has its olive in the center.

Can I make Pan de Jamón with Turkey?

Yes, you can use turkey to make this bread. The only thing is that it would not be pan de jamón, but pan de pavo. This option is perfect for people who do not eat pork. If you choose to make the turkey version, don’t leave out the turkey bacon.

But, if you accept a suggestion, add a handful of dried cranberries to the olives and raisins. Also, increase the amount of melted butter you brush the dough. Everything else is equal.

Pan de jamón is undoubtedly the most delicious savory bread we Venezuelans enjoy during the holidays. I wrote the following in September 2021, almost ten years after sharing my recipe. These are tips that result from my experience over all the years, especially since I moved to Miami, where I make my bread for sale during the holiday season:

Here is my pan de jamón recipe. I hope you like it as much as we do. Thanks for subscribing to my Youtube channel and for visiting my Amazon store. 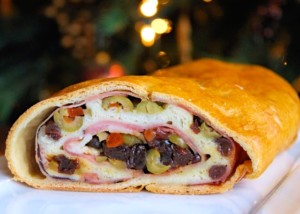 A symbol of the Venezuelan Christmas culinary traditions, this is the most delicious and easy-to-make pan de jamón (ham bread) you can dream of. First of all, it comes packed with one whole pound of ham. Last but not least, you do not have to knead anything! Make it and everybody will ask you for the recipe!
Prep Time1 hr 45 mins
Cook Time30 mins
Resting Time30 mins
Total Time2 hrs 45 mins
Servings: 1 loaf
Calories: 3698kcal

The nutritional values are estimated per loaf. Each loaf may serve 12 people.