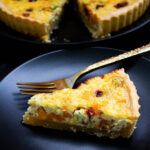 This guava and gorgonzola quiche recipe, with lots of roasted butternut squash, is all you need to celebrate the arrival of the fall and baking season. It’s savory and sweet at the same time, and like any quiche, you can serve it as breakfast, lunch, and dinner.

Note: As a member of the Amazon Affiliate Program and other affiliate programs, I receive compensation for products sold through the affiliate links in this post at no cost to the buyer.

The best part: this guava and gorgonzola quiche is so festive you can serve it as one of the side dishes for your Thanksgiving feast. You can also bring it to any Thanksgiving or Friendsgiving celebration, and I guarantee you’ll nicely surprise everybody with the explosion of flavors it creates on the palate.

Yottam Ottolenghi’s Membrillo and Stilton Quiche inspired this dish. Ottolenghi’s recipe was published in his book Plenty More, which makes a beautiful holiday present for any foodie. His recipe calls for membrillo or quince paste and Stilton cheese. Stilton is the British cousin of French Roquefort and Italian gorgonzola, all blue cheeses.

Both membrillo paste and Stilton are hard to find in Miami. So, I made my recipe with gorgonzola. I also substituted quince paste with guava paste, which is super popular in Miami, where we have delicious guava pastries all over the place. In this way, I transformed what would be a Londonian quiche into a dish that screams Miami!

Ottolenghi’s recipe call for a good shortcrust pastry. I opted for my infallible pie and quiche crust, the easiest crust you can dream of.

A few words about gorgonzola

According to the Italian Trade Agency, gorgonzola is a “raw-milk cheese with blue-green and/or grey light blue marbling, produced with whole pasteurized cow’s milk originating from the production area. It can be Piccante (piquant), Dolce (sweet), and Piccola Piccante (less piquant.)

For centuries gorgonzola cheese has been produced in the town of Gorgonzola, in Lombardy, northern Italy. Since 1996, the Italian blue cheese has held the Denominazione di Origine Protetta or Protected Designation of Origin (PDO.) A PDO identifies goods produced, processed, and prepared in a specific geographical area, using the recognized know-how of local producers and ingredients from the region concerned.

This means that gorgonzola sold in the European Union and signatory countries of the Lisbon Agreement can only be called gorgonzola if produced in the Italian provinces of Bergamo, Brescia, Como, Cremona, Cuneo, Lecco, Lodi, Milan, Novara, Pavia, Varese, Verbano-Cusio-Ossola and Vercelli, and some towns of the Alessandria province.

In the US, however, according to the Food and Drug Administration’s Standards Of Identity, gorgonzola is the product name for a type of cheese for production in the United States, and it applies to any gorgonzola cheese imported from abroad.

Back to my recipe. In the making of this guava and gorgonzola quiche, I chose Italian gorgonzola piccante, which is aged for four months and has a strong flavor and aroma. If you’re not fond of pungent and aromatic cheeses, then my suggestion is to buy a less aged gorgonzola dolce, also known as sweet gorgonzola.

Guava and gorgonzola: A sweet and savory quiche

The beauty of this pie is that it’s savory and sweet. The crust is the neutral canvas where a feast of colors, textures, and flavors happens. Roasted butternut squash brings the season’s bright colors, and so does the guava paste that melts in the oven, creating a gooey consistency.

The neutral flavor of the squash and sweetness of the guava perfectly contrast with the intense, tart flavor of the gorgonzola, creating a unique, tasteful dish.

How to avoid a mushy quiche crust

Besides pre-baking the crust at a high temperature for 30 minutes, once it’s cold, I add a few tablespoons of grated Parmigiano Regiano (another Italian cheese holding a PDO) and press it. The cheese would create a sort of shield. This trick secures a non-mushy crust and adds an extra layer of flavor.

How to avoid a burnt quiche crust

Before pre-baking the crust, I cover the edges with an adjustable silicone protector. While doing this, it’s imperative not to press the dough: simply place the protector, and that’s it. Your crust won’t burn and will acquire its beautiful golden color when you bake it with the filling.

Following is my recipe. I hope you like it as much as I do. Thanks for subscribing to my Youtube channel and visiting my Amazon store.

This Guava and Gorgonzola quiche, with lots of roasted butternut squash, is all you need to celebrate the arrival of the fall and baking season. It’s savory and sweet at the same time, and like any quiche, you can serve it as breakfast, lunch, and dinner, warm or at room temperature.
Prep Time30 mins
Cook Time1 hr 10 mins
Resting time30 mins
Total Time2 hrs 10 mins
Servings: 8 people
Calories: 564kcal