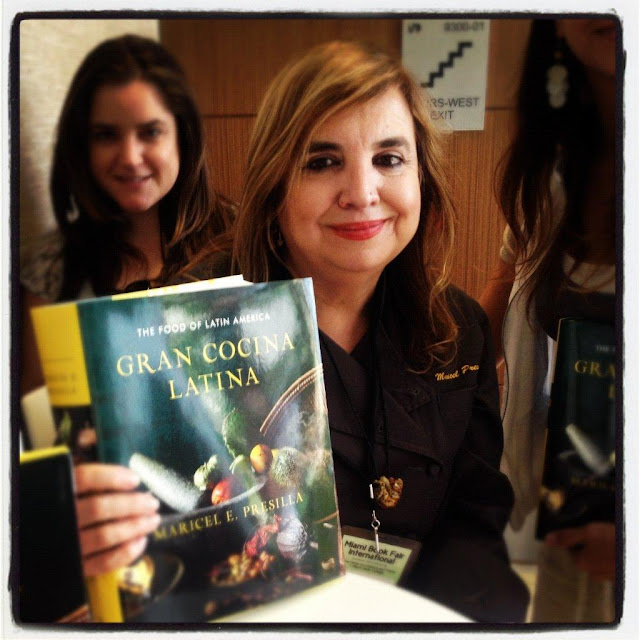 Yesterday my friend Nelly Guinand invited me to meet with her at the Miami Book Fair International. It was the last day of the fair, so I made an exception in my super busy schedule and went there.

Not that I’m a diva. As every year, I’m in the peak of my working season. Besides that, the internet in my house had been absolutely crazy lately and my laptop is kind of crazy too and for “planetary” reasons (Mercury is currently retrograding) I cannot replace it until November 27.

In the middle of this “crisis”, I decided to take it easy and go to the book fair to meet with my friend. After all, she’s better than the Bach flower therapy rescue remedy and I always have fun with her.

What I didn’t know was the surprise Nelly had for me. She was waiting for me at the Miami Culinary Institute, in a cooking class by chef, restaurateur and author Maricel Presilla, where I learned how to make the best Cuban mojo ever!

No need to say that Maricel was one of the super stars of the book fair where she was launching her book The Food of Latin America: Gran Cocina Latina the most amazing compendium of our food and culinary traditions, from México to the Argentinean Patagonia, from sofritos and adobos to sancochos, from ceviches to empanadas, from mojos to arepas, to tres leches.

I had the opportunity of being with Maricel at her book signing, and even walk by the fair stands by her side and trust me: I felt it was like walking with Merryl Streep at the isle of the Kodak Theater in Los Angeles during the Oscar’s night.

Just for you to have an idea about who this a-ma-zing Cuban born lady is, Maricel is the first woman invited as a guest chef to cook at the White House, she won the 2012 James Beard Award as Best Chef Mid-Atlantic, is the co-owner of Cucharamama (Mother Spoon), a pan Latino restaurant in Hoboken, New Jersey, where she also has an eatery, Zafra, and Ultramarinos, a delicatessen shop.

Maricel holds a doctorate in medieval Spanish history, is a food historian and the author of The New Taste of Chocolate: A Cultural and Natural History of Chocolate with Recipes.

The bad news, Maricel’s The Food of Latin America: Gran Cocina Latina was sold out at the Miami Book Fair, so I couldn’t get my copy signed by the author.

The good news, I already ordered it on Amazon and I will be able to devour it pretty soon. Even better, I’m going to meet with Maricel next January when she will come back to her beloved Miami to taste chocolate in a contest where she’s part of the grand jury. We already agreed we are going to have mojitos and daiquiris and taste some Latin food. Then she will sign my book.

Thank you Nelly for the treasure of your friendship.